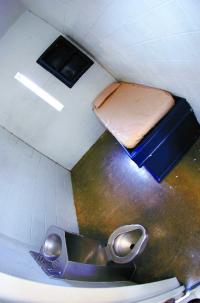 Prisoners there are locked alone in their cells for 23 hours a day. Their food is delivered through a slot in the door of their 80-square-foot cell. They stare at unpainted concrete walls onto which nothing can be put. They look through doors of perforated steel, what one officer described to me as “irregular-shaped Swiss cheese.” Except for the occasional touch of a guard’s hand as they are handcuffed and chained when they leave their cells, they have no contact with another human being.

In this condition of enforced idleness, prisoners are not eligible for vocational programs. They have no educational opportunities; books and newspapers are severely limited; post and telephone communication virtually nonexistent. Locked in their cells for as many as 161 of the 168 hours in a week, they spend most of the brief time out of their cells in shackles, with perhaps as much as eight minutes to shower. An empty exercise room — a high-walled cage with a mesh screening overhead, also known as the “dog pen” — is available for “recreation.”

These are locales for perpetual incapacitation, where obligations to society, the duties of husband, father or lover are no longer recognized. An inmate wrote me, “People go crazy here in lockdown. People who weren’t violent become violent and do strange things. This is a city within a city, another world inside of a larger one where people could care less about what goes on in here. This is an alternate world of hate, pain, and mistreatment.”

Occasionally, solitary confinement may be necessary to separate prisoners but why forbid books and newspapers? This is retribution not deterrence. Indeed, as Peter Moskos has argued, physical punishment would be a better deterrent and more humane.