My favorite (readily available) American chocolate bar is the dark Chocolove XoXoX, but recently they changed it.  The packaging went from very dark to to gold, and the flavor is now a little sweeter and less nutty.  The cocoa content is higher, but somehow it doesn’t quite shine through as strongly.  It still might be the best on the American market, but now I wonder, because it is modestly worse than before.

I no longer find the old bars in supermarkets, and an Amazon order of the old bars brought a shipment of the new bars instead.  But when I go to bookstores which sell chocolate, their supply turns over not so quickly, and so some of them still carry versions of the old bar.  For now.

I have five copies of the old bar left in the cupboard, and no guarantee for when I might replace them. 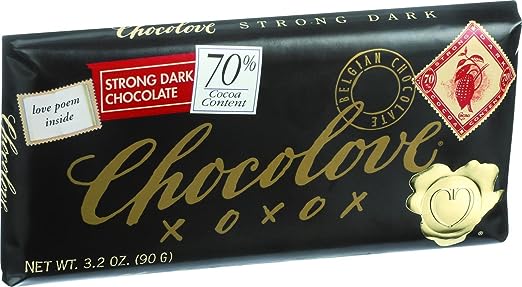 My intuition is to eat them next in sequence, rather than postpone the exhaustion of their supply.  Eventually I will engage in an optimal forgetting of their very fine taste, and it is best that happens sooner rather than later.  To cite George Constantinides, that would be an optimal smoothing of habit-forming consumption.

An alternative philosophy is to consume them later in life, as late as spoilage costs will allow, so as to spread out aesthetic peaks over time.

Yet another alternative is give them away to latter-day customers who only have known the slightly inferior bar, and thus wreck their lives for sport.