Even though William Baumol didn’t win the Nobel prize this year it got me to thinking about the cost disease, as did the death last week of William Bowen, the co-author of Performing Arts – The Economic Dilemma which brought the cost disease to public attention. The cost disease says that if two sectors have unequal levels of productivity growth then the sector with lower growth will increase in relative price. If in 1900, for example, it took 1 day of labor to produce one A good and 1 day of labor to produce one B good then the goods will trade 1:1. Now suppose that by 2000 1 unit of labor can produce 10 units of A but still only one unit of B. Now the goods trade 10:1. In other words, in 1900 the price or opportunity cost of one B was one A but in 2000 to get one B you must give up 10 A. B goods have become much more expensive.

The cost disease says only that the relative price of the low productivity good increases, it doesn’t say that the low productivity good becomes absolutely more expensive. The economy in 2000 is much wealthier than in 1900 so relative to income B has become cheaper. Anyone who could consume x units of B in 1900 can still consume x units of B in 2000, the only difference is that in 2000 they will be giving up more A than in 1900 so the tradeoff has become steeper even though still affordable.

Tyler offers one response to the cost disease namely that it’s true if you define the good narrowly (listening to a live performance of a 40 minute Mozart composition) but why should we define the good narrowly? If instead we define the good as “listen to music for 40 minutes” then it’s clear that costs have fallen dramatically. Not only has the cost of listening fallen, variety has increased. Costs have fallen even further since Tyler wrote. In a similar way, Tyler and I have argued that online education greater lowers costs and increases quality. 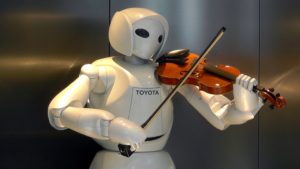 At any moment there will always be some sectors that are increasing in productivity at a faster rate than other sectors–that is the nature of progress, uneven and episodic–but the time when one could distinguish a manufacturing sector and a service sector and argue that as a general rule the latter increases in productivity at a slower rate than the former is rapidly coming to a close. K has become L.

Addendum: Timothy Lee also has a piece today on the cost-disease.