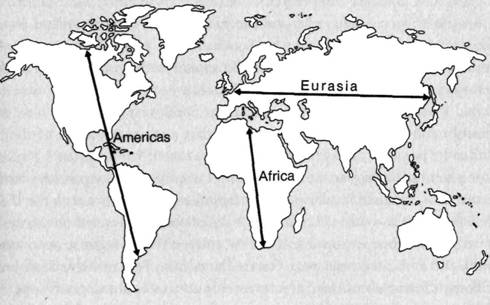 difficult for both humans and technologies to adapt. Thus, a long East-West axis, such as that found in Eurasia, meant a bigger “market” for technology and thus greater development.

A few pieces of evidence are suggestive:

Laitin and Robinson (2011) and Laitin et al. (2012) report that linguistic diversity has been historically more persistent across lines of latitude than longitude, suggesting that population movements were more prevalent East-West relative to North-South. Ramachandran and Rosenberg (2011) report similar evidence based on the geographic distribution of genetic variation. While these studies speak to greater movements of populations East-West relative to North-South, they do not speak directly to the diffusion of technologies and development. Alternatively, Olsson and Hibbs (2005) provide a cross-country analysis in which a variable measuring East-West orientation of major landmasses correlates significantly with present-day income levels. This finding explicitly links continental orientation to income levels. However, it does not speak directly to the  mechanisms (e.g., more diffusion of technologies) leading to this correlation.

In Did Technology Transfer More Rapidly East-West than North-South?, from which I just quoted, Pavlik and Young offer more direct evidence on the natural direction of technological diffusion:

We employ Comin et al.’s (2010) data on ancient and early modern levels of technology adoption in a spatial econometric analysis. Historical levels of technology adoption in a (present-day) country are related to its lagged level as well as those of its neighbors. We allow the spatial effects to differ depending on whether they diffuse East-West or North-South. Consistent with the continental orientation hypothesis, East-West spatial effects are generally positive and stronger than those running North-South.