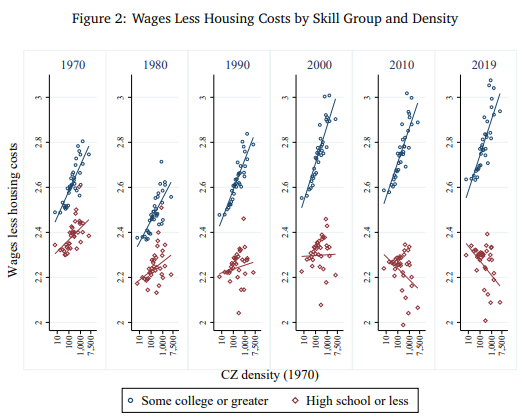 People are more productive in cities. As a result, people move to cities to earn higher wages but some of their productivity and wages is eaten up by land prices. How much? In a new paper Philip G. Hoxie, Daniel Shoag, and Stan Veuger show that net wages (that is wages after housing costs) used to increase in cities for all workers but since around 2000 net wages actually fall when low-wage workers move to cities. The key figure is at right.

As I wrote earlier, it used to be that poor people moved to rich places. A janitor in New York, for example, used to earn more than a janitor in Alabama even after adjusting for housing costs. As a result, janitors moved from Alabama to New York, in the process raising their standard of living and reducing income inequality. Today, however, after taking into account housing costs, janitors in New York earn less than janitors in Alabama. As a result, poor people no longer move to rich places. Indeed, there is now a slight trend for poor people to move to poor places because even though wages are lower in poor places, housing prices are lower yet.

Why has housing become so expensive in high-productivity places? It is true that there are geographic constraints (Manhattan isn’t getting any bigger) but zoning and other land use restrictions including historical and environmental “protection” are reducing the amount of land available for housing and how much building can be done on a given piece of land. As a result, in places with lots of restrictions on land use, increased demand for housing shows up mostly in house prices rather than in house quantities.

Moreover, as I also argued earlier, even though the net wage is still positive for college-educated workers a signficant share of the returns to education are actually going to land owners!  Enrico Moretti (2013) estimates that 25% of the increase in the college wage premium between 1980 and 2000 was absorbed by higher housing costs. Moreover, since the big increases in housing costs have come after 2000, it’s very likely that an even larger share of the college wage premium today is being eaten by housing. High housing costs don’t simply redistribute wealth from workers to landowners. High housing costs reduce the return to education, reducing the incentive to invest in education. Thus higher housing costs have reduced human capital and the number of skilled workers with potentially significant effects on growth.