Fascinating piece in the NYTimes about a new city in India, a new city of 1.5 million people and more or less no city government. 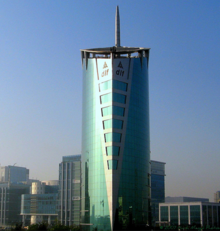 Gurgaon was widely regarded as an economic wasteland. In 1979, the state of Haryana created Gurgaon by dividing a longstanding political district on the outskirts of New Delhi. One half would revolve around the city of Faridabad, which had an active municipal government, direct rail access to the capital, fertile farmland and a strong industrial base. The other half, Gurgaon, had rocky soil, no local government, no railway link and almost no industrial base.

As an economic competition, it seemed an unfair fight. And it has been: Gurgaon has won, easily. Faridabad has struggled to catch India’s modernization wave, while Gurgaon’s disadvantages turned out to be advantages, none more important, initially, than the absence of a districtwide government, which meant less red tape capable of choking development.

Gurgaon  has no publicly provided “functioning citywide sewer or drainage system; reliable electricity or water; public sidewalks, adequate parking, decent roads or any citywide system of public transportation.” Yet Gurgaon is a magnet for “India’s best-educated, English-speaking young professionals,” it has 26 shopping malls, seven golf courses, apartment towers, a sports stadium, five-star hotels and “a futuristic commercial hub called Cyber City [that] houses many of the world’s most respected corporations.” According to one survey, Gurgaon is India’s best city to work and live. So how does Gurgaon thrive? It thrives because in the absence of government the private sector has stepped in to provide transportation, utilities, security and more:

From computerized control rooms, Genpact [a major corporation, AT] employees manage 350 private drivers, who travel roughly 60,000 miles every day transporting 10,000 employees. Employees book daily online reservations and receive e-mail or text message “tickets” for their assigned car. In the parking lot, a large L.E.D. screen is posted with rolling lists of cars and their assigned passengers.

And the cars are only the beginning. Faced with regular power failures, Genpact has backup diesel generators capable of producing enough electricity to run the complex for five days (or enough electricity for about 2,000 Indian homes). It has a sewage treatment plant and a post office, which uses only private couriers, since the local postal service is understaffed and unreliable. It has a medical clinic, with a private ambulance, and more than 200 private security guards and five vehicles patrolling the region. It has A.T.M.’s, a cellphone kiosk, a cafeteria and a gym.

“It is a fully finished small city,” said Naveen Puri, a Genpact administrator.

…Meanwhile, with Gurgaon’s understaffed police force outmatched by such a rapidly growing population, some law-and-order responsibilities have been delegated to the private sector. Nearly 12,000 private security guards work in Gurgaon, and many are pressed into directing traffic on major streets.

Not everything works well, of course. Gurgaon is describe as a city of “private islands.” Private oases would be a better term. Within the private oases life is good but in between lies a desolate government desert. Not only are services such as roads and utilities poor, the private oases don’t internalize all the externalities so there are problems with common resources such as the water table. It would also be more efficient to have centralized sewage and electricity.

Much of the article is written as a “cautionary tale,” the private sector can’t do everything and the absence of government has made the city dysfunctional.  I see the situation somewhat differently. The problem is that the original developer didn’t go far enough. The original developer, DLF, made a deal to build commercial buildings and apartments but:

… a state agency, the Haryana Urban Development Authority, or HUDA, was supposed to build the infrastructure binding together the city.

And that is where the problems arose. HUDA and other state agencies could not keep up with the pace of construction. The absence of a local government had helped Gurgaon become a leader of India’s growth boom. But that absence had also created a dysfunctional city.

Had the original developer been responsible for both the oases and the desert it could have built the power plants, the roads and other infrastructure and made locating in Gurgaon even more desirable than it is now. It is true that a city requires public goods which local governments often do not provide. Charter cities try to get around this problem by importing wholesale a new, higher-quality government. An alternative is to avoid government all together and privatize enough to make the entire city what is in effect a hotel on a grand scale.

But what to do now?  The governments involved are inefficient and often corrupt. We can hope that they will get better in response to the well-educated populace and the incoming corporations but even today, the solution is not simply to hope for better government but to expand on what is working well. The firms that operate the private oases are “small cities,” the solution is to make these cities larger.

Connect enough office parks, factories, and apartments, for example, and it will make sense for a private firm to build an efficient electric plant rather than have smaller firms use inefficient and polluting diesel as is the case now. Similarly, Will Rogers once said the solution to congestion was to have business build the roads and government build the cars. In fact, only the former is necessary. Privatize the roads and they will be quickly built and well maintained (yes, they will probably be more expensive than necessary due to some monopoly power but at this point in time that is a second-order problem).

As the private oases reach out and connect with one another most of the kinks will be ironed out. The city is only thirty years old and undergoing a growth spurt, so some problems are to be expected. The big picture, however, is that a modern city has been built from the ground up based almost entirely on private development, it is attracting residents and jobs and leading the country in economic growth. A remarkable achievement.

Addendum: For more historical and contemporary examples on the private provision of public goods see The Voluntary City.

Addendum 2: Matt Yglesias gets it and then makes some interesting comments and critiques.