In the movies I’ve seen people who try to get out of a traffic ticket by telling the police officer they made a donation to the policeman’s ball, but those were comedies. I had no idea that not only does this exist there are official cards. In fact, the police in New York are livid that the number of cards is being limited:

The city’s police-officers union is cracking down on the number of “get out of jail free” courtesy cards distributed to cops to give to family and friends. 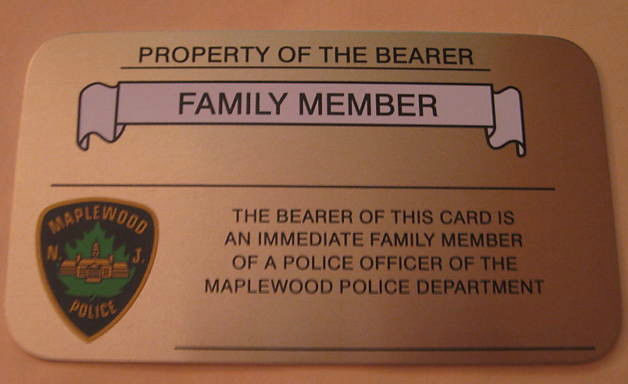 Lynch slashed the maximum number of cards that could be issued to current cops from 30 to 20, and to retirees from 20 to 10, sources told The Post.

The cards are often used to wiggle out of minor trouble such as speeding tickets, the theory being that presenting one suggests you know someone in the NYPD.

The rank and file is livid.

“They are treating active members like s–t, and retired members even worse than s–t,” griped an NYPD cop who retired on disability. “All the cops I spoke to were . . . very disappointed they couldn’t hand them out as Christmas gifts.”

A Christmas gift of institutionalized corruption.

Here’s another article on these cards which just gets all the more stunning.

First, there are tiers of cards. Silver cards are the highest honor given to citizens. It’s almost universally honored by officers, and can also help save money on insurance. Gold PBA cards are only given to police officers and their families. You’d be hard-pressed finding a cop who won’t honor a gold card.

Gold and silver cards! It gets better. You can buy these cards on eBay. Here’s a gold New Jersey card on sale for $114. A silver “family member” shield goes for $299. Some of these are probably fake. The gold and silver are rare but remember, cops get 20 to 30 regular cards so you can see why they might be upset at losing them.

The regular cards have become more common as NYC hires more police. The union may in fact be trying to bump up its monopoly profit by restricting supply.

The cards don’t just go to family members. The rot is deep:

Union officials say the cards are also public relations tools and tokens of appreciation handed out to politicians, judges, lawyers, businessmen, civil service workers and members of the news media.

A retired police officer on Quora explains how the privilege is enforced:

The officer who is presented with one of these cards will normally tell the violator to be more careful, give the card back, and send them on their way.

He’s not kidding. Here is what seems like a real police officer on a cop chat room (from Mimesis law)

It’s important for me to get in touch with shield [omitted] and ask him why he felt it necessary to say “I’m not even going to look at that” to my PBA card and proceed [sic] to write a speeding ticket on the Bronx River Parkway yesterday afternoon to my fukking WIFE!!!!!!!!!!!!

I’ll show him the courtesy he so sorely lacks by not posting his name on a public forum.

Any help would be appreciated.  Please inbox me.

I will find you.

I find these cards especially odious as more and more police are funding themselves through fines and forfeitures. Discriminatory taxation increases the tax rate. It’s one rule for the ruler and another for the ruled.

The cards are not a secret but I agree with my colleague Mark Koyama who remarked:

Sometimes you find out something about the country you live in that makes it appear little better than a corrupt, tinpot, banana republic.