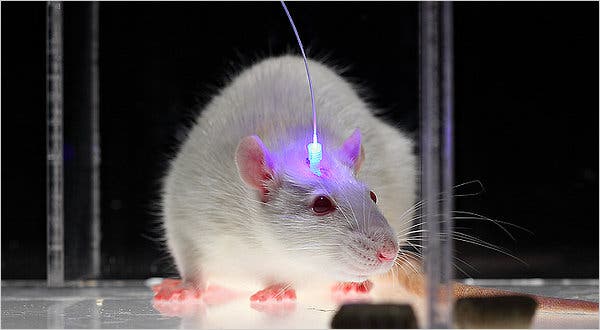 The science of mind control is advancing at a furious rate. In 2011, the NYTimes reported that scientists had engineered neurons to be sensitive to light and then using fiber optic cables and brain implants they were able to quickly turn mice neurons on and off, instantly changing the behavior of the mice (paper here). The setup, which required genetic engineering, brain implants and cables worked incredibly well but a rather expensive method of mind control.

Nature: Advanced technologies for controlled delivery of light to targeted locations in biological tissues are essential to neuroscience research that applies optogenetics in animal models. Fully implantable, miniaturized devices with wireless control and power-harvesting strategies offer an appealing set of attributes in this context, particularly for studies that are incompatible with conventional fiber-optic approaches or battery-powered head stages. Limited programmable control and narrow options in illumination profiles constrain the use of existing devices. The results reported here overcome these drawbacks via two platforms…Neuroscience applications demonstrate that induction of interbrain neuronal synchrony in the medial prefrontal cortex shapes social interaction within groups of mice, highlighting the power of real-time subject-specific programmability of the wireless optogenetic platforms introduced here.

Now, if I am reading this 2022 paper and announcement correctly, scientists have eliminated the need for any implant or cable but can instead program the brain using infrared:

Now, scientists at the Wu Tsai Neurosciences Institute at Stanford University have developed the first non-invasive technique for controlling targeted brain circuits in behaving animals from a distance. The tool has the potential to solve one of the biggest unmet needs in neuroscience: a way to flexibly test the functions of particular brain cells and circuits deep in the brain during normal behavior — such as mice freely socializing with one another.

The research was published March 21, 2022 in Nature Biomedical Engineering by Guosong Hong and colleagues at Stanford and Singapore’s Nanyang Technological University. Hong is a Wu Tsai Neurosciences Institute Faculty Scholar and assistant professor of materials science and engineering in the Stanford School of Engineering who uses his background in chemistry and materials science to devise biocompatible tools and materials to advance the study of the brain.

Moreover, the scientists think that the genetic modifications can be done with a simple injection:

Hong and colleagues are also developing nanoscopic beads that can convert focused beams of ultrasound into light, and which can be injected directly into the bloodstream, making it possible to optogenetically target cells anywhere in the brain and to change this targeting at will within a single experiment.

If the tools for mind control can be injected then it doesn’t seem fanciful to think that they can be ingested. Mind control in a bottle. The fear is outside mind control but the reality will be self mind-control. Humans have been altering their minds for thousands of years but neuronal level adjustment at the flick of a switch is something new.