Many people were surprised at Paul Manafort’s relatively light sentencing for bank fraud, filing fake tax returns, and failure to report foreign assets and compared his sentence of 47 months to other cases of seemingly lesser crimes given longer prison terms. A viral tweet thread from public defender Scott Hechinger began:

For context on Manafort’s 47 months in prison, my client yesterday was offered 36-72 months in prison for stealing $100 worth of quarters from a residential laundry room.

Anecdotes, however, run the risk of misleading if they are not representative. The Bureau of Justice Statistics just released Time Served in State Prison 2016. Stealing laundry quarters sounds like larceny (no break in). The average time served for larceny was 17 months and the median time served was 11 months.

15 years in prison for drug possession. You shouldn’t need more info than that to be outraged. But then learn: Juanita is a mother of 6. Her 18 year old is now head of household. Raising 5 kids. Crime is not even a felony in Oklahoma anymore.

The average time served for drug possession was 15 months and the median time 10 months. Arguably too long but a far cry from 15 years.

For a serious violent crime like robbery, taking property by force or threat of force, the average time served was considerably higher, 4.7 years and the median time served 3.2 years.

You can see the table below for more data. Judge for yourselves, but for most crimes mean and median time served don’t seem to me to be obviously too high. Moreover, keep in mind that most crimes do not result in an arrest let alone a conviction or time served.

I support decriminalization of many crimes, shorter sentences for some crimes and fewer scarlet letter punishments. I want to reduce bias and variability in the criminal justice system. But I do not want to return to the crime rates of the past. Even as crime rates fall, we should be careful about declaring the war won and going home. We are under policed in the United States and despite anecdotes that rightly shock the conscience, average time served is not that high, especially given very low arrest and conviction rates.

* Using the normalized percent of total releases for rape, robbery and assault to form the weighted average. Corrected from an early version that said 14 months. 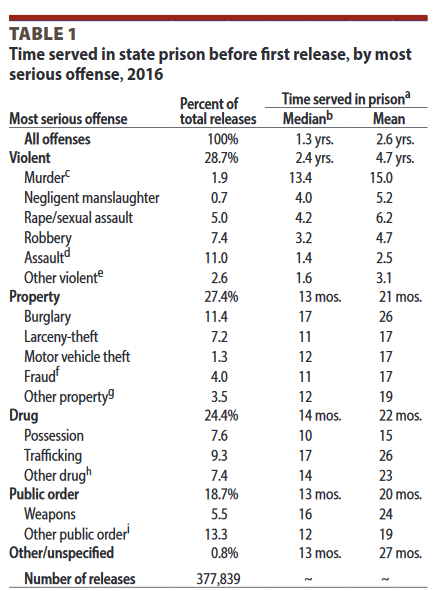