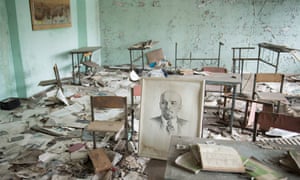 Chernobyl, HBO’s taut 5-part mini-series, is excellent and it sticks  close to the facts (although one female character played by Emily Watson is clearly made up). By all accounts, the series accurately represents life in the former Soviet Union and through a variety of means from color palette to casting and dialogue it does a remarkable job at capturing the political economy. One thing I learned (so far, it hasn’t all appeared yet) is that it could have been much, much worse but the Russians avoided the worst scenario with a combination of bravery, smarts and luck.

The number of cancer deaths from Chernobyl appears to be quite low. The WHO estimated an additional 9,335 deaths with about half of those coming from workers and nearby residents and other half more distant impacts, other estimates are higher. More recent analysis, however, suggests that Chernobyl and its aftermath had relatively small but significant effects across a large number of people. Here are two recent papers:

Abstract: We use prenatal exposure to Chernobyl fallout in Sweden as a natural experiment inducing variation in cognitive ability. Students born in regions of Sweden with higher fallout performed worse in secondary school, in mathematics in particular. Damage is accentuated within families (i.e., siblings comparison) and among children born to parents with low education. In contrast, we detect no corresponding damage to health outcomes. To the extent that parents responded to the cognitive endowment, we infer that parental investments reinforced the initial Chernobyl damage. From a public health perspective, our findings suggest that cognitive ability is compromised at radiation doses currently considered harmless.

and The long-run consequences of Chernobyl: Evidence on subjective well-being, mental health and welfare by Danzer and Danzer.

Abstract: This paper assesses the long-run toll taken by a large-scale technological disaster on welfare, well-being and mental health. We estimate the causal effect of the 1986 Chernobyl catastrophe after 20 years by linking geographic variation in radioactive fallout to respondents of a nationally representative survey in Ukraine according to their place of residence in 1986. We exclude individuals who were exposed to high levels of radiation—about 4% of the population. Instead, we focus on the remaining majority of Ukrainians who received subclinical radiation doses; we find large and persistent psychological effects of this nuclear disaster. Affected individuals exhibit poorer subjective well-being, higher depression rates and lower subjective survival probabilities; they rely more on governmental transfers as source of subsistence. We estimate the aggregate annual welfare loss at 2–6% of Ukraine’s GDP highlighting previously ignored externalities of large-scale catastrophes.