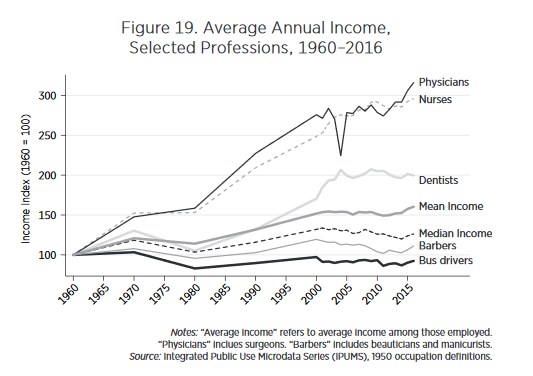 There has been a lot of ink spilled over the rising cost of health care and in Why Are the Prices So D*mn High? Helland and I do not cover every theory and cannot satisfy every objection. Our goal is more modest. We can say that one major factor in rising health care costs is the rising price of skilled labor. We argue that there is a direct, obvious, and measurable cause of higher costs in healthcare—namely, the price of skilled labor. No profession other than physicians has seen such large increases in incomes over the past 50 years. Figure 19 shows the real income of physicians from 1960 to 2016, indexed to 100 in 1960. Since 1960 the real income of physicians has increased by a factor of three. By comparison, barbers and bus drivers have seen essentially no increase in real incomes. Median incomes are up only modestly whereas mean incomes, which are pulled up by outliers, are up by only 50 percent.

Moreover, nurse incomes have risen in lock-step with those of physicians.

With more physicians and more nurses each making more, it’s not surprising that the cost of medical care would increase.