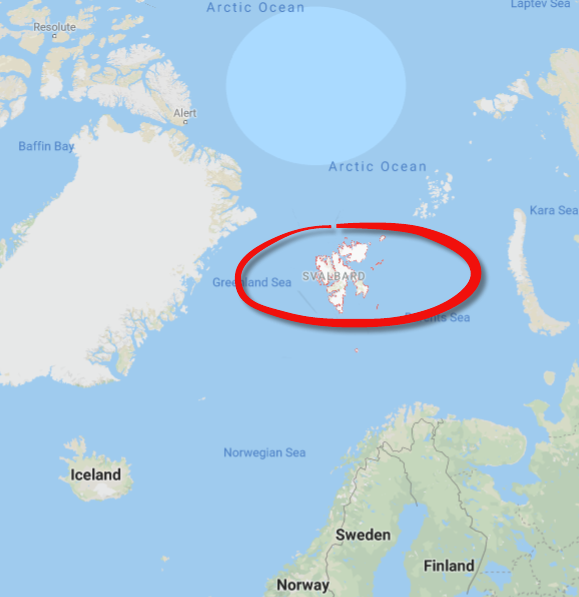 Well north of Iceland there is a island archipelago that is governed by Norway but because of a peculiar treaty it has entirely open borders:

When you land in Longyearbyen, the largest settlement in the Norwegian archipelago of Svalbard, you can step off the plane and just walk away. There’s no passport control, no armed guard retracing your steps, no biometric machine scanning your fingers. Svalbard is as close as you can get to a place with open borders: As long as you can support yourself, you can live there visa-free.

In an excellent piece in The Nation, Atossa Araxia Abrahamian describes the history and what it is like to visit:

Formally, Svalbard—known as Spitsbergen until the 20th century—belongs to Norway, which writes the laws, enforces order, builds infrastructure, and regulates hunting, fishing, and housing. Last year, when a Russian man was caught trying to rob a bank in town, a Norwegian judge sentenced him under Norwegian law to a Norwegian jail. But Norway’s control over Svalbard comes with obligations outlined by an unusual 1920 treaty signed as part of the Versailles negotiations ending World War I.

Written in the aftermath of the war, the Svalbard Treaty is both of and ahead of its time. Its architects stipulated that the territory cannot be used for “warlike” purposes. They included one of the world’s first international conservation agreements, making Norway responsible for the preservation of the surrounding natural environment. The treaty also insists that the state must not tax its citizens more than the minimum needed to keep Svalbard running, which today typically amounts to an 8 percent income tax, well below mainland Norway’s roughly 40 percent.

Most radically, the treaty’s architects held Norway to what’s known as the nondiscrimination principle, which prevents the state from treating non-Norwegians differently from Norwegians. This applies not just to immigration but also to opening businesses, hunting, fishing, and other commercial activities. Other countries could not lay formal claims on Svalbard, but their people and companies would be at no disadvantage.

Some 37 percent of Svalbard’s population is foreign born and there is an abandoned Soviet town with statues of Vladmir Lenin. Tyler will also be pleased to know that there are puffins.

I can’t say that I am tempted to move, but given global climate change it’s good to know that I could.