The excellent Random Critical Analysis has a long blog post, really a short book, on why the conventional wisdom about health care, especially in the United States, is wrong. It’s a tour-de-force. Difficult to summarize but, as I see it, the key points are the following. (I also drawn on It’s still not the health care prices.) 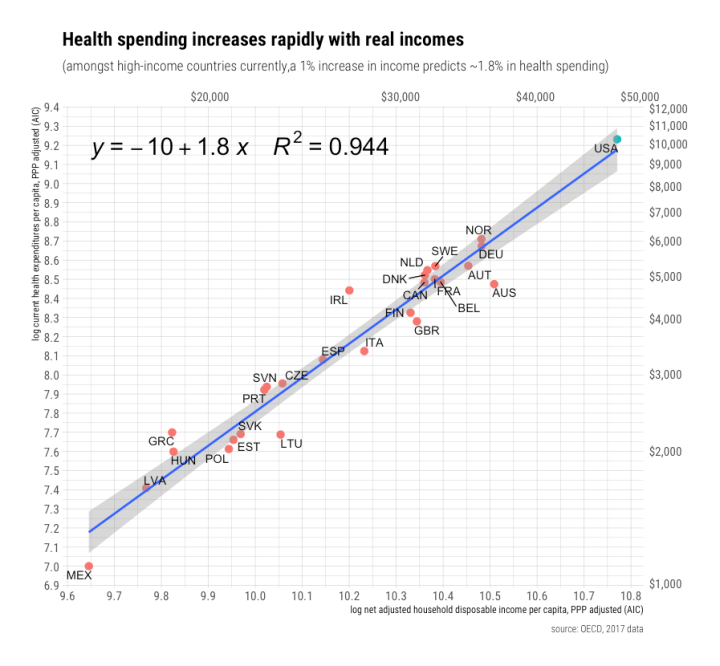 Notice that the United States doesn’t look unusual when income is measured at the household level, i.e. Actual Individual Consumption, which measures the value of the bundle consumed by households whether the bundle items are bought in the market or provided by governments or non-profits. (AIC also avoids some issues with GDP per capita when a country has lots of intellectual property and exports, e.g. Ireland).

2. The price of health care increases with income but at a slower rate than income. As a result of the above:

3. The price of health care relative to income is lower in rich countries, including the United States.

Since spending is going up faster than income but prices are not it must be the case that quantities are also increasing with income.

4. The density of health care workers (number of workers) and intensity (what the workers do) increases with income. RCA: Rich countries consume much more cutting edge health care technology (innovations).  For every 1% increase in real income, we find a 1-3% increase in organ transplant operations, a 1-2% increase in pacemaker and ICD implants, a 1-2% increase in the density of medical imaging/diagnostic technology, and likely similar patterns for all manner of other new technologies (e.g., insulin pumps, ADHD prescriptions, etc.).   Obviously, these indicators are just the tip of the iceberg. Still, where data of this sort are available, they tend to be highly consistent with extreme income elasticity (particularly newer, more expensive forms of health care).  In the main, costs rise because this technological change tends to requires a lot more people in hospitals and providers’ offices to deliver this increasingly complicated array of health care (surgical procedures, diagnostics, drugs, therapies, etc.).

A bottom line is that health care spending in the United States is not exceptional once we take US income into account.

RCA’s analysis is consistent with the Baumol effect and my analysis with Helland in Why Are the Prices So Damn High (we have some minor differences with RCA on physician incomes but neither of our analyses depend on that point). A big point is that RCA and Helland and I argue that the rising price sectors are not crowding out consumption of other goods. We can and are buying more of other goods even as we spend more on health care and education. Or, as RCA puts it:

…these trends indicate that the rising health share is robustly linked with a generally constant long-term increase in real consumption across essentially all other major consumption categories.

It is true that the United States has a convoluted payment system which results in absurd and enraging bills. Fixing the pricing system could generate more equity and efficiency but RCA’s analysis tells us that billions are at stake, not trillions. A corollary is that as other countries reach current US levels of income their health care spending will look more like the United States does today.

See RCA for much more.