Surrogates is a 2009 science-fiction movie starring Bruce Willis, Radha Mitchell, Rosamund Pike and Ving Rhames. On Rotten Tomatoes it’s rated at a measly 37% (tomatometer) and 38% (audience). When I first saw it I thought it was underrated and a recent re-watch cemented that conclusion.

Surrogates is about a slightly future world in which people predominantly interact with one another through surrogates, i.e. humanoid robots controlled from home. The premise should be familiar today in the Zoom, Metaverse, avatar age in a way it wasn’t in 2009. Surrogates touches on trans issues (your surrogate can be a different gender), the meaning of identity, age, aging and youth, the advantages of surrogates for creating low crime and even eliminating infectious diseases (good prediction!) and the sense of anxiety and fear we feel when interacting in the real world after becoming comfortable with surrogates and the sense of unrealness of interacting with avatars.

The world of surrogates is threatened when for the first time ever a human operator is murdered by “killing” their surrogate. Willis and Mitchell are detectives trying to solve the mystery and track down the killer. The film noir aspect isn’t Chinatown but it follows the formula and follows it well. A luddite cult is involved.

Perhaps one of the reasons Surrogates didn’t do well is that it’s low-budget. At the same time as this world has advanced robotics the cars are purely circa 2009! The surrogates are played by the same actors as the operators with only makeup and hair pieces to indicate the differences but in fact the make-up and surrogate acting is very well done! The contrast between young, perfectly coiffed and flattened surrogate Bruce Willis and the old, bloody, beaten but expressive Bruce Willis is well done. The ending is excellent.

A masterpiece? No. But Surrogates is an underrated gem. It’s available now on HBO. 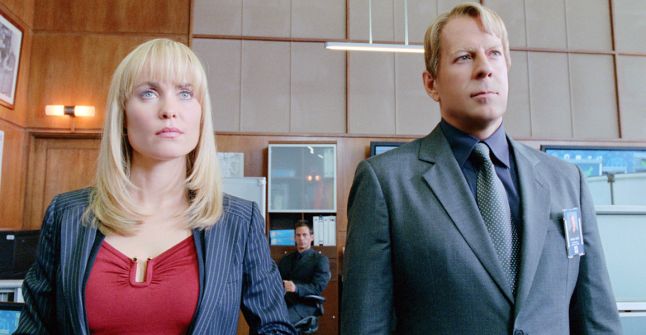