Ciudad de la Luz has become a prominent example of Valencia’s frenzy of modern-day pyramid building, which left a legacy of $25.5 billion in regional debt and bankrupt infrastructure projects as well as the backlash now building against it.

Valencia’s other investments included a harbor for superyachts, an opera house styled like the one in Sydney, Australia, a futuristic science museum, the biggest aquarium in Europe and a sail-shaped bridge, not to mention an airport that never had a single arrival or departure. It also attracted extravagant events like the America’s Cup and Formula One racing.

The Daily Mail takes a look at Spain’s “ghost airport,” a billion Euro project that was meant to serve 5 million passengers a year and is now closed after just three years in operation. 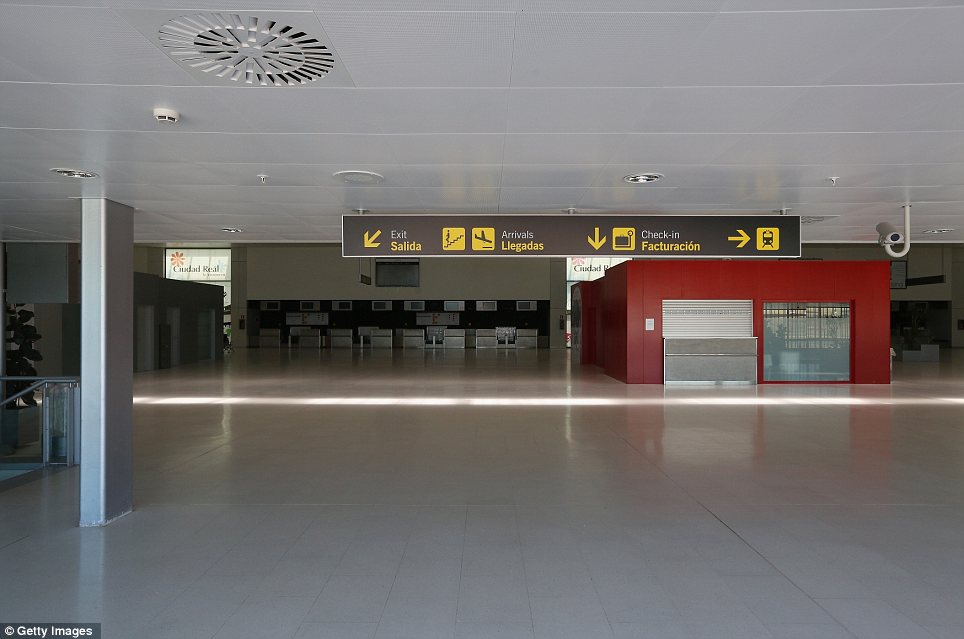 The Socialist regional government spent millions propping up the venue, promoting the project with advertising campaigns and approving a €140 million guarantee to keep it afloat.

But, last October, it saw its final commercial flight, by Vueling. The airport remained open for another six months, the staff still being paid to deal with a handful of private arrivals.

It finally closed in April, but even though it is now closed to air traffic, maintenance tasks still have to be carried out.

The 4,000 metre runway has to be continually painted with yellow crosses, so pilots flying over the airport will know they cannot land there.

Private money appears to have also taken a bath on many of these projects although it’s always difficult to say after government guarantees and kickbacks. The Times quotes one tourist on the meaning:

“I understand now why there’s a financial crisis in Europe,” said Bryce Matuschka of New Zealand. “The bridge is a real work of art, and the aquarium is great, but for some of these buildings you just have to ask, What was all that money spent for?”

I don’t think that’s quite right. My view is that rather than causing a crisis, bad investments are mostly masked by a boom and revealed by a crisis. Still, “infrastructure spending” doesn’t always create jobs; sometimes it’s better to stick with slow rail and sewers.