Since we are heading into a trade war with Canada it’s time to rally the troops and remind them of the time Canada burned down the White House. And lest you think that is just a matter of history consider how Canada is attacking the United States today using biological weapons.

Smithsonian Insider: In the early 20th century, Canada geese were considered endangered in the U.S. So in the 1950s and 1960s, birds from the Midwest were 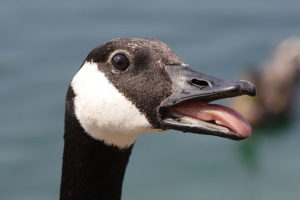 released in eastern and southern states to boost their numbers. The strategy worked too well. Populations grew exponentially in the 1990s and today millions of wild Canada geese are permanent residents in cities and towns across the U.S., constantly eating and depositing large amounts of feces in the habitat they share with humans.

As public health concerns have grown, a team of biologists at the Smithsonian’s National Museum of Natural History recently decided to take a close look at the bacteria living in the intestines of these birds. What they found was eye-opening. Scientists discovered the high prevalence of 3 bacterial species that cause serious disease in humans: Clostridium perfringens, Streptococcus suis (harmful to pigs too) and Staphylococcus sp. Inside the birds they found other potentially pathogenic organisms that may contain virulent strains known to cause serious infections in wild and domestic waterfowl, poultry, domestic mammals and farmed fish.

When Canada geese are killed for food by animals such as a dog, fox or cat, or run over by a car on an urban street, these harmful pathogens are released into the environment and can potentially infect humans.

And don’t forget. All that foul language we have been hearing recently? Blame Canada!