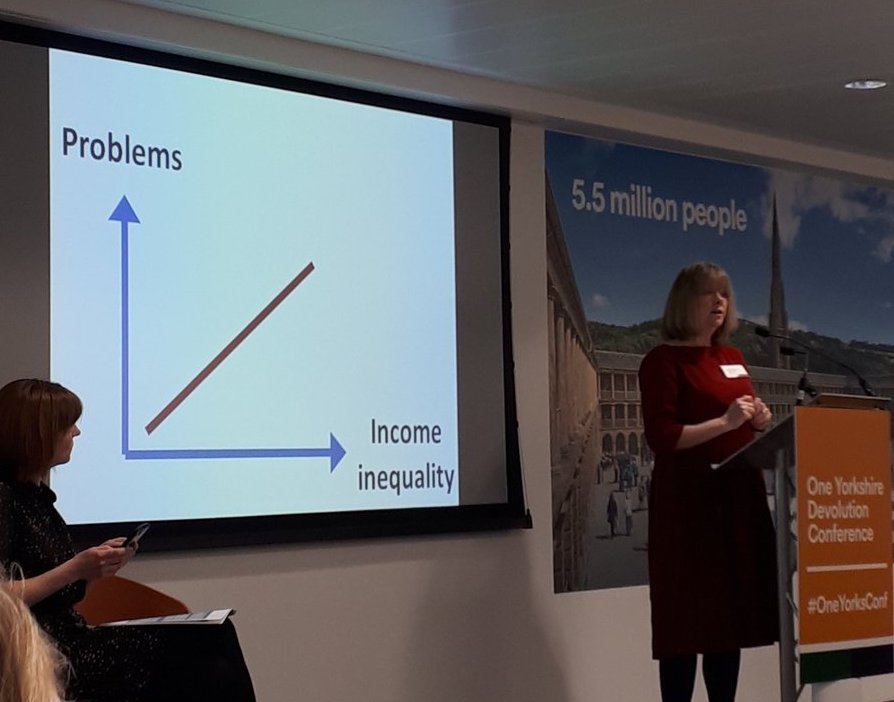 The Spirit Level by Wilkinson and Pickett made a big splash a decade ago by showing many correlations between inequality and various problems. In a recent talk, Pickett summarized the thesis of the book with the graph at right.

Even at the time, however, there were peculiarities in the data–for example, some countries were dropped without explanation and data with different definitions were spliced together–as pointed out by Christopher Snowdon in the Spirit Level Delusion. Adding in a few more countries, for example, made many of the correlations disappear.

Snowdon now has a nice post with another test. Suppose we run the same or similar regressions using today’s data? If the relationships are robust we ought to see the same correlations or even stronger correlations given the increase in inequality.

Here, for example, is a key graph from The Spirit Level on inequality and life-expectancy. 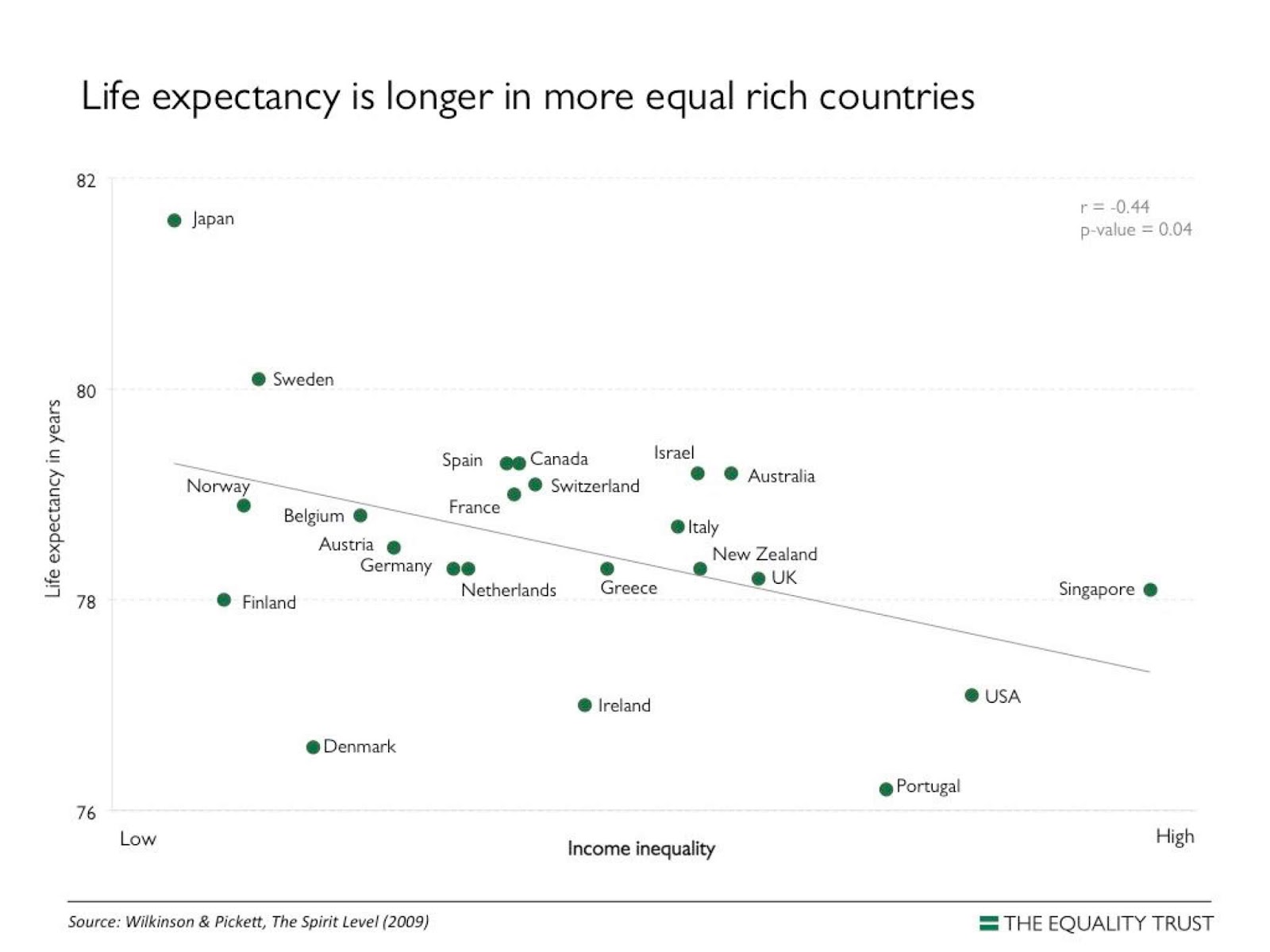 If, however, we use the same countries but today’s most up-to-date figures on inequality and life-expectancy we find no correlation. 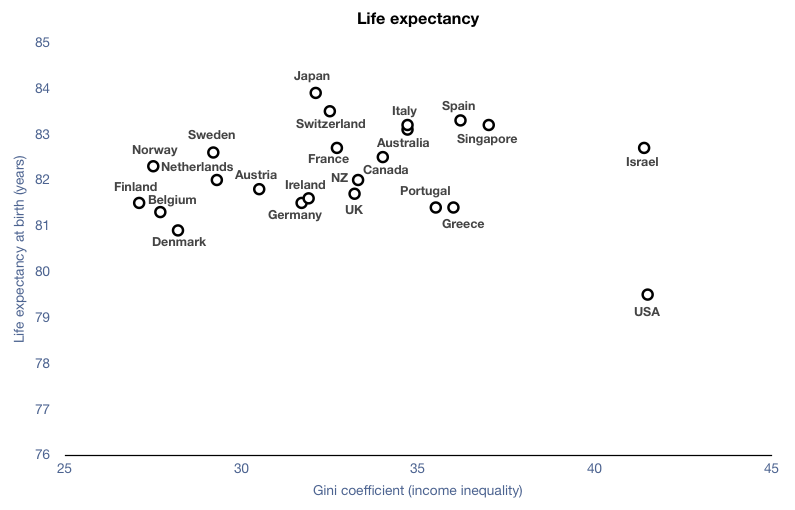 If we add the four countries that are unequivocally richer than Portugal and were excluded from The Spirit Level for no good reason (South Korea, Hong Kong, Slovenia and the Czech Republic (now known as Czechia)), there is a statistically significant association with inequality but it is in the opposite direction to that predicted by The Spirit Level hypothesis, with greater inequality correlating with longer life expectancy (r2=0.145, R=0.385, p-value=0.0495). 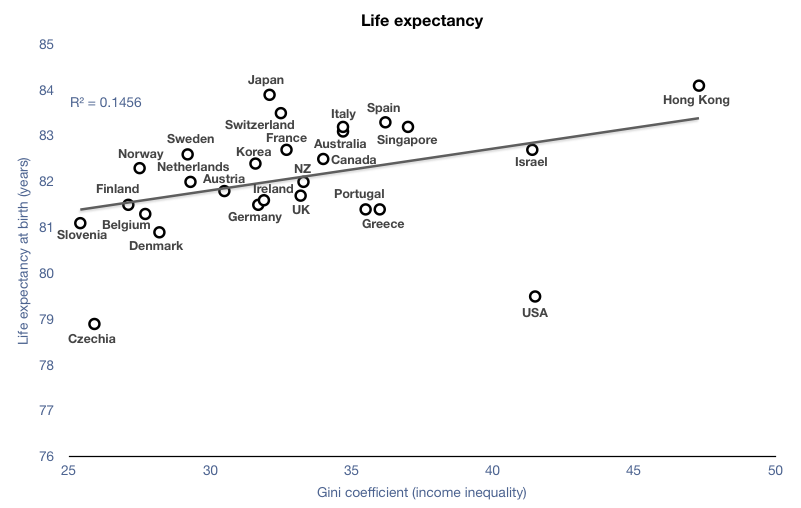 After examining a variety of data. Snowdon summarizes:

In summary, most of the biggest claims made by Wilkinson and Pickett in The Spirit Level look even weaker today than they did when the book was published. Only one of the six associations stand up under W & P’s own methodology and none of them stand up when the full range of countries is analysed. In the case of life expectancy – the very flagship of The Spirit Level – the statistical association is the opposite of what the hypothesis predicts.

If The Spirit Level hypothesis were correct, it would produce robust and consistent results over time as the underlying data changes. Instead, it seems to be extremely fragile, only working when a very specific set of statistics are applied to a carefully selected list of countries.

It’s certainly possible that inequality has a causal effect on various issues (both positive and negative) but it seems that such effects are small and subtle enough to require much more than cross-sectional country-level data to uncover.