The Arthashastra, the science of wealth and politics, is one of the world’s oldest treatises on political economy. Written by Kautilya, legendary advisor to the Indian King Chandragupta Maurya (reign: 321–298 BCE), the Arthashastra has often been compared to Machiavelli’s The Prince and has been a touchstone in Indian political economy for well over a thousand years. 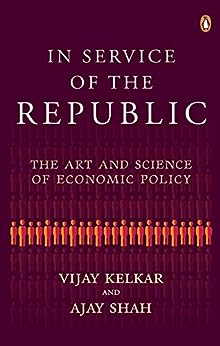 Vijay Kelkar and Ajay Shah, two long-time advisors to the Indian government, have written the new Arthashastra, In Service of the Republic: The Art and Science of Economy Policy. In Service doesn’t go into great detail on current policies in India (Joshi’s Long Road is the best recent overview), it instead distills timeless wisdom on the making of political economy.

Public policy failures are born of: (1) The information constraint; (2) The knowledge constraint; (3) the resource constraint; (4) The administrative constraint; and (5) The voter rationality constraint. These five problems interact, and jointly generate government failure, of both kinds; pursuing the wrong objectives and failing on the objectives that have been established.

A government organization that is riven with corruption is not one which was unlucky to get a lot of corrupt people. It is one where the rules of the game facilitate corruption.

There are two pillars of intervention in banking in India. On one hand, the state regulates banking. In addition, the Indian state produces banking services through the ownership of bank….There are conflicts between these two [pillars]. Regulation by the state may be indulgent towards its own entities….this calls for strong separation between the two pillars.

Kelkar and Shah are especially concerned with policy making in the Indian context of low state-capacity:

A policy pathway that is very successful in (say) Australia may not work in India as it is being placed in a very different setting. Envisioning how a given policy initiative will work in India requires deep knowledge of the local context.

If the fine for driving through a red light is Rs 10,000, there will be pervasive corruption. Jobs in the highway police will be sought after; large bribes will be paid to obtain these jobs. There will be an institutional collapse of the highway police. It is better to first start with a fine of Rs 100, and build state capacity.

(On that theme see also my paper with Rajagopalan, Premature Imitation.)

In Service to the Republic is the book that every policy maker and future policy maker should be given while being told, “before you do anything, read this!”

Addendum: I will be in India next week and after a visit to Agra and Hampi, I will be giving some talks at Ramaiah University in Bangalore and later in the month at the Indian School of Public Policy.