On Friday morning, a US air strike killed Abu Alaa al-Afri, a senior leader in ISIS, whom the US says it considers the organization’s second-ranked leader.

This isn’t the first time that al-Afri has been reported dead — though the US government has allegedly verified his death.

But if (as seems likely) al-Afri is dead, this will be yet another instance in which ISIS’s number two official has been killed. In August of last year, for example, a US airstrike killed Fadhil Ahmad al-Hayali, then identified as the group’s number two.

This continues a trend that news consumers may recognize from counterterrorism efforts against al-Qaeda, in which the group seemed to lose one third-in-command (after Osama bin Laden and Ayman al-Zawahiri) after another.

As some Twitter wags noted, this all hearkens back to a 2006 Onion article, “Eighty Percent Of Al-Qaeda No. 2s Now Dead.”

As Zack mentions, there may be reasons why the #1 is harder to find and kill, but I would suggest a complementary hypothesis.  At many points in time there is more than one #2, just as corporations may have a variety of Executive Vice Presidents.

And let’s say that one of these #2’s is killed.  How will the United States report this?  “One of seven #2’s has been killed”?  Or perhaps the easier to communicate and more important sounding “We have taken out number two.”

On Wikipedia, the (a?) previous #2 of ISIS is described as “Deputy leader of ISIL?“, question mark in the original.

Here is one look at the command structure of ISIS (or try this alternative).  I cannot vouch for its accuracy, but it is one quick way to see that “#2” is perhaps not always so well-defined: 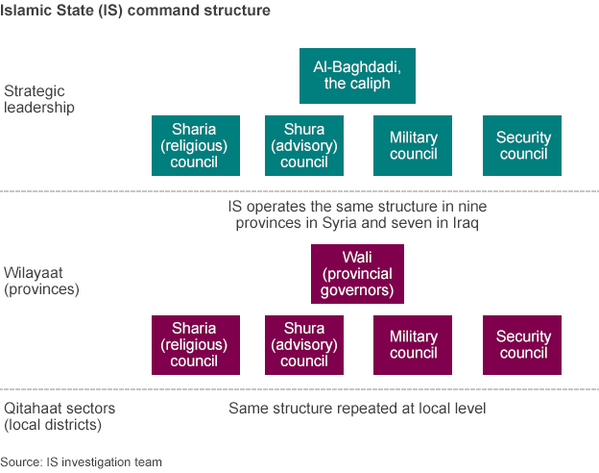 One concrete implication is this: the more number twos there are, the more likely you can kill one of them.  And those are exactly the same circumstances when killing a number two has a low marginal return.  Keep in mind that the kill is endogenous, and it could be indicating that one of the stronger #2s has strengthened his hand by betraying one of the weakies and getting the West to do the dirty work.  And that kind of competition across subordinates may be precisely what strengthens the hand of the leader.