1. How Neanderthal how are you?

2. How much do top chess players earn?

3. How the “Sarko trade” is bailing out Spain, and Interfluidity on same general topic.

5. Is big business more innovative these days than small?

In The Size of the Economy and the Distribution of Income in the Roman Empire, a careful paper published in the Journal of Roman Studies in 2009, Walter Scheidel and Steven Friesen estimate the size and distribution of the Roman economy at its demographic peak around the middle of the 2nd century c.e. 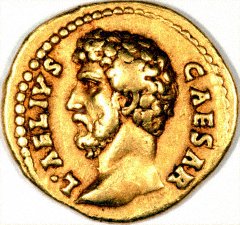 We conclude that in the Roman Empire as a whole, a ‘middling’ sector of somewhere around 6 to 12 per cent
of the population, defined by a real income of between 2.4 and 10 times ‘bare bones’
subsistence or 1 to 4 times ‘respectable’ consumption levels, would have occupied a fairly
narrow middle ground between an élite segment of perhaps 1.5 per cent of the population and a vast majority close to subsistence level of around 90 per cent. In this system, some 1.5 per cent of households controlled 15 to 25 per cent of total income, while close to
10 per cent took in another 15 to 25 per cent, leaving not much more than half of all income for all remaining households.

Thus, in Rome the top 1.5% controlled 15-25% of income while in the United States around 2007 the top 1% controlled 23.5% of income thus suggesting slightly more inequality in the United States. Scheidel and Friesen calculate a Roman Empire gini coefficient of .42-.44 again perhaps slightly less than the U.S. coefficient of around .4-.45 depending on source.

Interestingly, the Roman State did not manage to collect that much:

Given a GDP of somewhere
around HS17–19bn, annual state expenditure of approximately HS900m would have
represented an effective tax rate of approximately 5 per cent of GDP, which is the same as
for France in 1700. This finding confirms Hopkins’s claim that the imperial government
did not capture more than 5 to 7 per cent of GDP and that Roman taxes were fairly low.
The overall public sector share of GDP was somewhat larger depending on the scale of
municipal spending, while the overall nominal tax rate had to be higher still in order to
accommodate taxpayer non-compliance, tax amnesties, and rent-seeking behaviour by
tax-collectors and other intermediaries. Moreover, we must not forget that Italy’s immunity from output and poll taxes required the public sector share in the provinces to exceed
the empire-wide average. These various adjustments allow us to reconcile our GDP estimate with reported nominal taxes of around 10 per cent of farm output on private land
reported in Roman Egypt and somewhat higher rates in less developed regions where
enforcement may have been more difficult.

(Thus, despite the aqueducts Rome may not have done that much for the people after all.)

Hat tip to Tim De Chant at Per Square Mile who has further discussion.

Coffee shops around the world have employed loyalty card schemes for many years, but now we’ve come across an interesting twist on the idea. In Singapore, a collaborate scheme aims to benefit eight of the city’s best independent cafés with the Be Disloyal disloyalty card.

The Be Disloyal disloyalty card — created by digital creative agency Antics, blogger Cortadito.sg and eight of Singapore’s independent coffee shops — was designed to encourage consumers to discover different coffee venues while bringing businesses together to grow as a vertical. From September until the end of this month customers can pick up a disloyalty card from one of the eight participating cafés. The card is stamped each time they purchase a coffee from one of the other seven cafés and, once the card is full, they return to the original café to receive their free coffee.

Competing with large chain brands can be difficult for small businesses, but teaming up with similar smaller companies can create stronger competition. Inspiration here for independent businesses in any industry!

The link is here and for the pointer I thank @amelapay, and more from her here.

That’s not the only title I could have given this post, here goes:

Beijing’s suburban Miyun County is going to build a large European-style town within five years and no one will be allowed to speak Chinese there, said the county mayor.

Wang Haichen said a local village would be turned into a 67-hectare English castle with 16 courtyards of unique houses. It will offer visitors souvenir passports and ban Chinese speaking to create the illusion of being abroad, Beijing News reported today.

So far 4.5 million yuan (US$708,300) has been invested to transform 16 peasant courtyards in Caijiawa Village into English-style dwellings. Wang told the newspaper that each of the 16 peasant households had received 30,000 yuan of government subsidy.

The county mayor insisted that one courtyard had been turned into a boutique hotel. “We built a laundry center to supply clean bed linens to the 16 households free of charge,” Wang said. “We are considering to offer them bicycles and electric bikes next year.”

The article is here, and for the pointer I thank M Kaan.  I predict it will end badly!

Where should we eat in Flushing, Queens, Sunday morning?  Hsieh hsieh!

In 2010, 31 percent of the graduating (undergraduate) class reported taking a job in financial services, source here, pointer from Dylan Matthews.

1. A theory of flattery inflation.

3. “Sheep can do better,” and dolphin-whale cooperation, and taxi auction markets in everything.

4. Long article on on-line, for-profit education; how much of it is arbitraging public school dollars?

5. There is no great stagnation (with music).

6. A survey of the Target2 debate and its importance.

Yields on short-term peripheral sovereign bonds are plunging, despite the fact that EU leaders appeared to make little progress at their highly-anticipated summit last week.

Pundits continue to expound on the flaws of the eurozone but markets are telling a different tale.

That’s because the European Central Bank may have already introduced roundabout measures that will solve some of Europe’s big problems—it’s making investing in peripheral sovereign debt a huge profit opportunity for banks.

Theoretically, financial institutions will be able coin money by borrowing ultra-cheap from the ECB and buying higher yielding sovereign debt.

Here is the story, and you will recall my earlier post here.  Karl Smith asks how this fits in with the treatment of collateral, and here is also a more skeptical take on the arbitrage.  My view is not that banks will find the arbitrage opportunity overwhelming (that is unclear), rather my view is that public choice mechanisms will operate so that desperate governments commandeer their banks to make this move, whether the banks ideally would wish to or not.  Make no mistake about it, this is doubling down and raising the stakes.  It’s funding debt through more debt.  It’s wrong to say the summit accomplished nothing, or consisted merely of empty, unenforceable pledges of austerity, although it did that too.

At this point you have to be asking whether it is better to simply end the eurozone now, no matter how painful that may be.  Unless of course you are an optimist about Italy reaching two percent growth, or Germany becoming fully cosmopolitan.  As a politician I probably could not bring myself to pull the plug, but as a blogger I wonder if that might not, at this point, be the wiser thing to do.  Current crisis aside, does anyone out there see the euro’s governance structure — even with reforms — as even vaguely workable?

Addendum: Do note also that the ECB has made no strong promise to continue this program, and indeed it is not in a position to make a credible commitment, most of all on the quality of collateral issue.  That means a lot of ups and downs, shifting credibility, and the gains could well collapse quickly.

A suburban Chicago high school fundraising to save a popular arts center is motivating students to donate with an earsplitting incentive: pay up and they’ll stop blasting Justin Bieber’s “Baby” during passing periods.

Evanston Township High School seniors Charlotte Runzel and Jesse Chatz convinced school administrators to let them play the popstar’s biggest hit over the loudspeakers for one week, or until they’d raised $1,000, the Chicago Sun-Times reports. Within three days, students had coughed up enough cash to silence the Canadian singer’s repetitive single.

The article is here, and for the pointer I thank the excellent Lawrence Rothfield.

As a former chess grandmaster, who at the height of this career he was ranked number forty in the world, Ken [Rogoff] has not been able to abandon his love of the game. Last year and this year again he visited the London Chess Classic, and in fact even joined in the live commentary of games. In the VIP room he was consulted by practically everybody, especially at a time when the world economy seems to be in serious trouble and the European monetary union on the verge of collapse.

Every year Harvard Economics Professor Ken Rogoff says he receives an unsolicited letter from one of the world’s top chess players. It is a different one every year but the question is the same: how can I get out of chess.

…construction accounts for about 13 per cent of the country’s GDP.

2. Model this, I call it the best and deepest game of hockey ever.  Seriously.

5. Reasons for a poor black kid to get pregnant.

From Yaniv Stopnitzky, who is on the job market from Yale:

Abstract: Female bargaining power in rural Haryana, as in much of northern India, is constrained by widespread discrimination against women.  In recent years, however, women successfully demand private sanitation facilities from potential husbands as a precondition for marriage.  I study this shift in bargaining power by modeling latrine adoption as an investment that males can make to improve their desirability on the marriage market, and I show that increases in the proportion of females with strong sanitation preferences drive males’ investment in toilets.  Moreover, I show women’s ability to secure latrines increases when they are relatively scarce in a marriage market.  I test these predictions empirically by studying a sanitation program in Haryana, India, known colloquially as “No Toilet, No Bride”.  Using a triple difference empirical strategy based on households with and without marriageable boys, in Haryana and comparison states, before and after program exposure, I provide evidence that male investment in sanitation has increased by 15% as a result of the program, and this effect is explained almost entirely by marriage markets where women are scarce.  These results suggest the relative scarcity of women in Haryana has, conditional on women surviving to marriageable age, improved the ability of the remaining women to secure valuable goods.

The author is George G. Szpiro and the subtitle is Finance, Physics, and the 300-Year Journey to the Black-Scholes Equation, A Story of Genius and Discovery.  Excerpt:

As the scion of a WASP family, [Fischer] Black headed straight to Harvard for his undergraduate studies.  He didn’t even apply to any other college.  Once there, he took a wide range of courses, including psychology, anthropology, sociology, mathematics, physics, logic, biology, and chemistry.  Strangely missing in this eclectic selection was anything related to finance, although he mentioned to his parents that he was considering “even economics.”  He also experimented with psychedelics and — ever the scientist — took notes about his mental state every half hour.  Once Black got arrested by the Cambridge police for demonstrating…but not again bigotry, racism, or world hunger.  He was jailed for demonstrating against Harvard’s decision to issue degrees in English rather than Latin.  Behind bars, his bluster soon vanished and when a Harvard dean came to check on the detainee’s conditions, Black quickly accepted the opportunity to get out.

I can’t remember the last time I learned so much about the history of economic thought, and on an important matter at that.  This book is a real contribution.  It doesn’t have the fancy or seductive writing style that you find in many popular science books nowadays, but it rates high in terms of substance.