My Bloomberg column is on another topic altogether, starting with bank runs, but this part I can reframe in terms of principal-agent theory.  We want to squeeze Putin so hard that he “cries Uncle”, yet without eliminating his surplus so much that he takes a lot of extra risk.  Hard to achieve both of those ends at the same time!  Here is one bit reflecting that dilemma:

For a point of contrast on how decentralized incentives operate on each side, consider the nuclear alert ordered by Putin on Sunday. The chance of Russian nuclear weapons being ordered into actual use is small. But Putin faces a dilemma as he attempts to manipulate the decentralized systems of the Russian military. If he gave an order for a nuclear strike on a Ukrainian city, would the Russian military obey it? Whoever did would know they could be liable for war crimes.

The outcomes here are impossible to forecast, but the uncertainty works in favor of the Ukrainians. If it became known that Putin ordered a nuclear strike and was ignored, for example, he would become the proverbial “paper tiger” rather quickly and might lose power altogether.

These decentralized mechanisms potentially shift the entire logic of the war. Russia has to win fairly quickly, or these and other forces will increasingly work against it. Ukraine thus can fight for a military stalemate, but Russia cannot. The Russian forces must take increasing levels of risk, even if those risks have what decision theorists call “negative expected value” — that is, they serve as desperate gambles and on average worsen the Russian situation.

Of course that makes the war increasingly dangerous, and not just for the Ukrainians. If Putin is afraid the forces in the field won’t always carry out his orders, for example, he may order the launch of 10 tactical nukes rather than just one.

1. Good thread on how Russia has been thinking about this conflict.  “Very good thread,” said one friend.

2. “In this paper, we show that the election of a new school board member causes home values in their neighborhood to rise. This increase is identified using narrowly-decided contests and is driven by non-Democratic members, whose neighborhoods appreciate about 4% on average relative to those of losing candidates.”  Link here.

3. It seems higher-priced hospitals do not deliver higher quality care.

4. Are the real lessons of Harry Potter guns and libertarianism? I agree with Tyler who wrote recently that “the risk of nuclear war remains the world’s No. 1 problem, even if that risk does not seem so pressing on any particular day.”

The probability of a nuclear war is inherently difficult to predict but what strikes me in this careful survey by Luisa Rodriguez for the Effective Altruism Forum is how much higher all the expert predictions and model forecasts are compared to what we would like them to be. Keep in mind that the following are annualized probabilities. For a child born today (say 75 year life expectancy) these probabilities (.0117) suggest that the chance of a nuclear war in their lifetime is nearly 60%, (1-(1-.0117)^75). At an annualized probability of .009 which is the probability from accident analysis it’s approximately 50%. See Rodriguez and also Shlosser’s Command and Control on the frightening number of near misses including one nuclear weapon dropped on North Carolina.

If we aggregate historical evidence, the views of experts and predictions made by forecasters, we can start to get a rough picture of how probable a nuclear war might be.[8] We shouldn’t put too much weight on these estimates, as each of the data points feeding into those estimates come with serious limitations. But based on the evidence presented above, we might think that there’s about a 1.17% chance of nuclear war each year and that the chances of a US-Russia nuclear war may be in the ballpark of 0.39% per year. 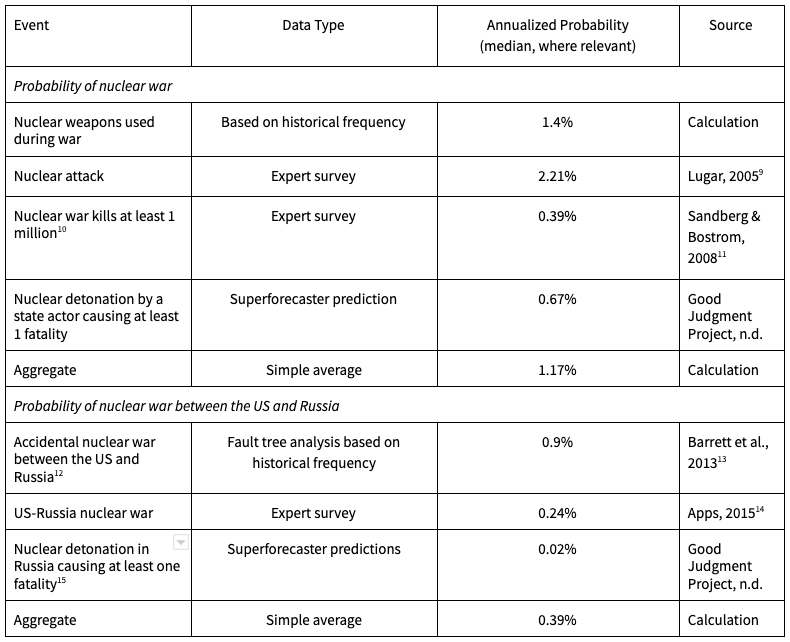 Addendum: A number of people in the comments mention that the probabilities are not independent. Of course, but that doesn’t make the total probability calculation smaller, it could be larger.

I was going to write a long post on this question, as recently I had been urged to do by one of the leaders of the Effective Altruism movement, during a Sichuan lunch.

But then Putin declared a nuclear alert, and I figured a short post might be more effective.  To be clear, I think the chance of nuclear weapons use right now is pretty low.  But it is not zero, if only because of errors and misunderstandings.  So imagine this kind of scenario repeated across a few centuries, with an increasing number of nuclear powers at that.  And this time around, there is a truly existential threat to the current version of the Russian state, and a number of people are suggesting that Putin has gone a little wacko.

And this is in a world where, about one week ago, the conventional wisdom was that Russia would not really invade Ukraine at all, maybe just a limited police action in the east.

As for Rogue AI, here is a long Scott Alexander post (ungated) on the topic.  For now I will just say that it makes my head hurt.  It makes my head hurt because the topic is so complicated.  And I don’t take any particular form of technological progress for granted, not along any time frame.  That holds all the more true for “exotic” claims about what might be possible over the next few decades.  Most of the history of the human race is that of zero economic growth, sometimes negative economic growth.  And how good were past thinkers at predicting the future?  Don’t just select on those who are famous because they got some big things right.

How many people, as public intellectuals, have made “let’s make sure all countries holding nuclear weapons can accurately distinguish between an incoming rocket and a flock of birds” their main thing?  Zero?

Chatted with some students interested in x-risk issues yesterday and one thing I said to them is we're going to need people who've taken the Longterm Pill to engage with the full range of natsec issues in order to be able to wield influence.

2. A new zoonotic origins paper.  And another here.  And a very good thread on those papers.

3. Russia and Ukraine in the air cargo market.

4. The game theory of currency competition with crypto and CBDCs.

5. Why the Russians are struggling.

The author is Terry Martin of Harvard, and the subtitle is Nations and Nationalism in the Soviet Union, 1923-1939.  This is an excellent book for understanding how some of the current Russia vs. Ukraine issues are rooted in Bolshevik times.  Here is one excerpt:

This understanding of nationalism led Platakov to support the only apparently logical response: attack nationalism as a counterrevolutionary ideology and nationality itself as a reactionary remnant of the capitalist era.  Lenin and Stalin, however, drew the exact opposite conclusion.  They reason as follows.  By granting the forms of nationhood, the Soviet state could split the above-class national alliance for statehood.  Class divisions, then, would naturally emerge, which would allow the Soviet government to recruit proletarian and peasant support for their socialist agenda.  Lenin argued that Finnish independence had intensified, not reduced, class conflict.  National self-determination would have the same consequences within the Soviet Union.

The goal of course was to limit the emergence of non-Russian nationalism, not to boost the fortunes of the ethnic and national minorities themselves.

A good book, think of it as a more general (non-technical) economic history of wheat, authored by Scott Reynolds Nelson.  The sad thing is the book’s subtitle: “How American Wheat Made the World” — yes it covers America, but a lot of the book, and I would say its best parts, focus on Russia and Ukraine.

I guess the publisher figured American readers don’t care that much about Ukraine?  Here is one excerpt:

Before Odessa [which had just been described as a major grain port], the Russian Empire had expanded slowly and defensively, one line of forts at a time.  After Odessa, Russia — just like the United States — possessed foreign exchange and could expand dramatically.  Wheat exports allowed the Russian Empire to fund its foreign wars, and so it surged into Poland, across the Caspian Sea, and toward China.  Nothing seemed capable of stopping the yeasty, kvassy expansion of the Russian Empire.  In fact, the spread of a different invisible creature, an invisible water mold, would further entrench Odessa as Europe’s city of wheat.

Fish sandwiches emerged as a regular meal for workers in Britain around 1870 once American grain arrived; a decade later this became fish and chips.

A fun book for me.

4. Claims about Russians claiming about Ukraine.

5. The blossoming of Indian chess talent.

In another pandemic challenge for Democrats, many of the institutions and aspects of daily life that skew culturally liberal have been undermined by the more cautious approaches to the coronavirus in left-leaning precincts: the performing arts, libraries and museums, public education, academia, mass transit, progressive religious congregations, and restaurants and small independent retailers. In pre-pandemic times, these sorts of institutions and businesses provided sustenance in Democratic-leaning communities, and their shakiness after nearly two years of off-and-on withdrawal has its own political cost.

I would remove restaurants from that list, but otherwise I agree.  That is from Alec MacGillis.

We find evidence that pay transparency causes significant increases in both the equity and equality of pay, and significant and sizeable reductions in the link between pay and individually measured performance.

Here is the full article, via a loyal MR reader.

This paper evaluates the impact of a sudden and unexpected nation-wide alcohol sales ban in South Africa. We find that this policy causally reduced injury-induced mortality in the country by at least 14% during the five weeks of the ban. We argue that this estimate constitutes a lower bound on the true impact of alcohol on injury-induced mortality. We also document a sharp drop in violent crimes, indicating a tight link between alcohol and aggressive behavior in society. Our results underscore the severe harm that alcohol can cause and point towards a role for policy measures that target the heaviest drinkers in society.

Fed. judge holds that Fairfax County, Virginia violated 14A by changing its high-ranked magnet school’s admission policies to decrease the proportion of Asian-American students. Strict scrutiny applies, and racial balancing is not a compelling interest.

The thread is of interest more generally, for instance “…the county officials here perceived that racial balancing was the goal because they got that cue from state-level Education officials on a DEI taskforce.”

I have been predicting privately for a while that TJ would be saved.  I’ll say it again: I think Wokeism has peaked, and the conflict in Ukraine will make it seem all the less relevant.

Ukrainian women in second city Kharkiv — just 20 miles from tyrannical Vladimir Putin’s vast invasion force — have been stunned by a salvo of admirers in uniform.

And they looked certain to get a rocket from Red Army commanders last night after giving away their position and posting pictures of their uniforms in flirty messages.

Dasha Synelnikova’s phone lit up with snaps of dozens of randy Russians when she set her location to Kharkiv on Tinder yesterday.

The soldiers are believed to have come into range after the Russian President’s commanders ordered a huge influx of tanks and troops within striking distance of the city.

Here is the full story, photos too, via the AG.  And a possible update?

1. The economy of solitary confinement.

4. Ed West on the socialism of nationalities.  And skeptical claims about the Russian military, speculative.  And a further skeptical take.

5. Overstated but interesting: is Putin’s attack on Ukraine a religious war?  And more on Putin’s spiritual destiny.