Christian Mischler on twitter reports that he bought one latte in Lebanon at 10:30 am and by the time he ordered his second at 1 pm the price had gone up by 9%! The coffee shop pegs to the USD. Lebanon’s inflation rate last year was 162% and the Lebanese pound/lira continues to fall against the dollar.

Fourteen years on, Atlantis The Royal — just a short stroll away from the original resort — is set to open this weekend along with much of the same extravagance. Beyonce will perform to a VIP audience for a reported $24 million and fireworks will light up the sky above the city’s famous artificial tree-shaped island of Palm Jumeirah.

Here is more from Bloomberg.  Via DL.

That is the topic of my latest Bloomberg column, here is one excerpt:

Imagine a world in which one consortium of governments proceeds with a climate plan — spraying sulfate aerosols into the air, brightening cloud cover over the oceans, maybe even dumping iron fillings into the ocean. Assume those policies are at least partially effective. Some other set of nations will respond by slowing down their costly transitions from dirty energy.

It’s not that these nations don’t care about the future of the planet. But successful geoengineering will induce them to lag in their more constructive efforts. Why go through a costly transition if the problem is being addressed? These nations might also conclude that the more they slow down, the more geoengineering the virtuous nations will undertake.

Our climate future is thus one of game theory. A nation such as Russia might go further yet and sabotage geoengineering efforts, perhaps with its own environmental tinkering. Even if such actions were seen as acts of war — well, these days that hardly seems beyond the pale.

In any case, such drastic responses are hardly needed for game-theory problems to come to the fore. It is easy enough for less conscientious nations simply to do less, once they observe that some successful geoengineering is in progress. Even within nations, states, regions and political parties are unlikely to agree how much geoengineering is appropriate, which could lead to inconsistent national policies over time.

None of this is an argument for banning geoengineering. In fact, humankind has been engaged in geoengineering for centuries — by pumping huge amounts of carbon into the atmosphere. And even if the world’s No. 1 scientific power (that’s the US, to be clear) rejects all intentional geoengineering, it is unlikely that all other nations will follow suit. Does the world really want to leave geoengineering in the hands of the Chinese? There is no choice but to try to make this messy situation better.

All worth a further ponder.

3. Josh Barro on why not mint the coin.

5. Scholar migration and per capita income.

The central implication of maximising behaviour amid competition is that rates of return tend toward equality. We test that implication in a market whose participants have the traits that behavioural economics suggests should make it hardest to find evidence of maximisation: the market for panhandling at Metrorail stations in Washington, District of Columbia. We find that stations with more panhandling opportunities attract more panhandlers and that cross-station differences in hourly panhandling receipts are statistically indistinguishable from zero. Panhandling rates of return thus tend toward equality. Extreme ‘behavioural’ traits do not prevent maximisation in this market.

That is a new Economic Journal article by Peter T. Leeson, R. August Hardy, and Paola A. Suarez.

Several design changes could be made to the decision-making process to make it safer, according to Cerf. The first would be to remove the 15-minute response time, which forces a US president to launch on warning. Cerf argues this hair-trigger response procedure is a “relic of the past”, considering that the US would retain a second-strike capability by air and sea even if all its land-based intercontinental ballistic missiles were destroyed.

Cerf also thinks that key decision makers should repeatedly practise emergency drills and analyse their responses to learn from their mistakes. They could also conduct “pre-mortems”, in which they imagine worst-case outcomes and then work backwards to see how they could be avoided. Another tweak would be to appoint one member of the decision-making team to oppose the consensus. Rachel Bronson, president and chief executive of the Bulletin of the Atomic Scientists, which has been warning of the dangers of nuclear war since 1945, hopes that Cerf’s forthcoming film will raise awareness and help nudge the world towards a saner, safer future. “What Moran is doing is very important,” she tells me at the PopTech conference. When it comes to nuclear launch protocols, she adds: “We need to rethink every aspect of this system and push for more time and more engagement and more democracy.”

In November, the Union of Concerned Scientists, another campaigning organisation, wrote to President Joe Biden urging him to revise the nuclear launch protocol. Any launch order should require the consent of two high-level officials in the presidential line of succession, the scientists wrote. “As the risk of nuclear war continues to grow, you have the power to take concrete, immediate steps to build a more stable nuclear weapons system, one that isn’t subject to the whims and questionable judgment of one person alone.”

Here is more from John Thornhill at the FT, an important piece and of course topic.

UK ambulances took an average of 1 hour & 32 minutes to respond to heart attacks & strokes last month. 5 X higher than target, double the average in November. Feels like the NHS is falling apart

That is from Matt Goodwin.

Some Ukrainian refugees in the UK are returning back home to get medical care, because their pledge of NHS coverage has turned out to be very meaningful.

I think one has to face the possibility that the NHS has fallen apart, and “all the King’s horses and all the King’s men…” etc.  To make it all much worse, the British citizenry is convinced that it can get a great product for nearly free.  How will the news be broken to voters?

I don’t see much coverage of this in the MSM, but here is Bloomberg reporting on Peter Thiel:

The venture capitalist’s comments came during a Q&A session after a speech at the Oxford Union, a 200-year-old debating society, on Monday. He also said that the crisis-stricken health service, currently grappling with strikes and long wait times for emergency care, was making people sick and needs “market mechanisms” to fix it. Such mechanisms include privatizing parts of it, avoiding rationing and loosening regulations…

“In theory, you just rip the whole thing from the ground and start over,” Thiel said after an address in which he argued that a perceived fear of disruption was holding back technological and scientific developments. “In practice, you have to somehow make it all backwards-compatible in all these ridiculous British ways.”

The first step to fixing the NHS was, he said, to break away from the view that it is “the most wonderful thing in the world” and understand it as an “iatrogenic” institution, which means it makes people sick.

Ouch.  What will it cost to recapitalize the thing?  How long will it take?  I am more optimistic about England than most commentators these days, but this is perhaps problem number one?

To be clear, I nonetheless recognize the recent successes of the NHS in collecting data and testing hypotheses.  It is patient care at the retail level that is the problem.

1. U.S. will lower the fee for renouncing U.S. citizenship.

2. Why does the AEA want to bureaucratize science?

4. Polling students on their sexual orientation.

I read your piece on novels as models many years ago, and I’ve been reflecting on it with the advent of LLMs. I wrote a piece (substack) making the case that the data required for AGIs is probably embedded within the human textual corpus, and leaned on your old writing as evidence. I think you would really like it. I would also be curious for a future MR post if you have any retrospective thoughts on your 2005 article.

From @cauchyfriend.  Putting the AGI issue aside, my longstanding view has been that there are more “models” embedded in text than most people realize, a point relevant for economic method as well.  I see LLMs as having established this case, in fact far more definitively than I ever would have expected.

Big takeaway from the GPT paradigm is that the world of text is a far more complete description of the human experience than almost anyone anticipated.

That is the new book by William D. Cohan, which I just reviewed for Times Literary Supplement.  Gated, but here is the opening bit:

The individual stocks of the Dow Jones Industrial Average typically fall from grace with some regularity. Of the thirty Dow stocks listed in 1990, for instance, only seven were still in the Dow as of November 2022, mostly because the companies have ceased to be important. Stripped down to its basic fundamentals, that is the tale of General Electric (GE): one of rise and fall. But it had an exceptionally long time at the top. GE has its roots in the 1890s, and by 1993 it was the most valuable company in the United States, with a market value of more than $80 billion. It was removed from the Dow in 2018 – the last original stock from 1896 to leave the index. Its core business had shrunk, with no offsetting growth in another area. Today, the company is no longer a significant object of public attention.

This story can be told in many different ways, and the most impressive feature of William D. Cohan’sPower Failure is that he succeeds with multiple approaches.

You can buy the book here, note the American title is slightly different.

I think of Suzuki as on a par with Carlsen or Curry.  Here are a few simple facts:

He has recorded the complete cantatas of Johann Sebastian Bach, in pretty much perfect recordings. They are widely acknowledged to be the best Bach cantata recordings ever.  That amounts to 70 CDs of work.

He is currently recording the complete organ works of Bach.  Unlike the cantatas, I don’t think you can say they stand above all others, but they are in the top tier of Bach organ recordings.  Those will amount to — what ?…15 CDs or so.

His Bach harpischord recordings stand among the best.

Not long ago he conducted and recorded Beethoven’s 9th symphony and produced one of the finest renditions of an oft-recorded piece, one that has been taken on by most of the all-time greats.

He founded Bach Collegium Japan, and remains the music director.

Oh, I forgot to mention: “…he is also recording Bach’s concertos, orchestral suites, and solo works for harpsichord…”

Here is Suzuki on Wikipedia, he also records with his son.  Interestingly, his parents were Protestant Christians.

If you have any connections to Masaaki Suzuki that would help bring about a Conversation with Tyler, please do let me know!  How many others have his consistent record of achievement or anything close to it?

Search through the contents of 1000s of books!

Much much more to come 👀

Here is the link, I am told I am in there too.

1. Extraterrestrial life, according to Kevin Kelly.  I for one do not think we are quite that boring!

2. The NIH should set up a clinical trials committee.

Brian Potter on twitter notes “The reason the US doesn’t have abandoned cars littering the sides of roads anymore is because of cheap shredders that made recycling them profitable.” Pointing us to Junkyard Planet: 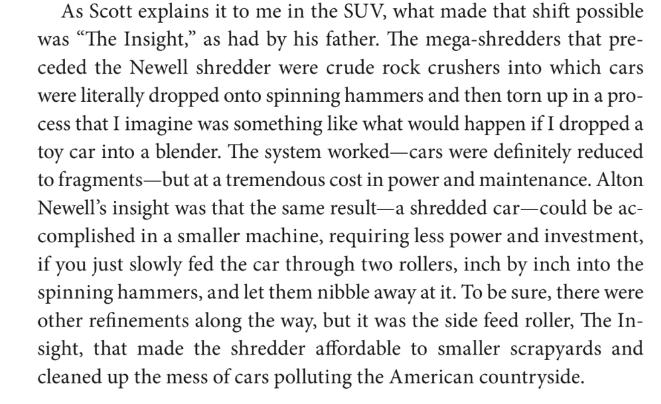 Here’s a video of the Newell Shredder in action. An excellent example of unintended consequences, the unknown ideas and devices that make our world possible and how profit-maximization leads to the conservation of resources.

By Ashlee Vance, I am reading it now.  Great book. Due out in May, you can pre-order here.